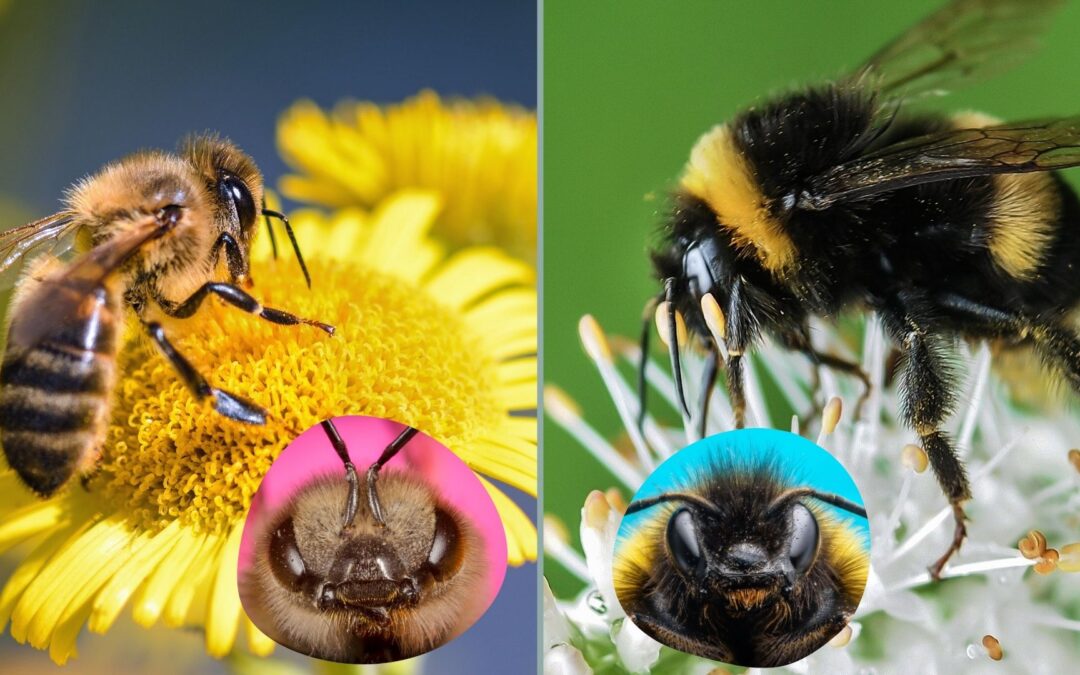 Bees alone are some of the oldest species on earth. A 100-million-year-old bee fossil was recently found! Bees are essential for the world’s ecosystem, and they are an essential part of biodiversity. Unfortunately, due to global warming, habitat loss, pesticides, and monocrop agriculture, the numbers of bees in the US are in sharp decline. The loss of these pollinators could damage the world’s economy and its ecosystem.

However, not all bees are equal. There are actually 20,000 known species of bee. They have different physical characteristics, different pollination habits, different behaviors, and different habitats. Two of the most common bee species are the bumblebee and the honeybee, but how do we know the difference?

Bumblebees are round and fuzzy. Honeybees are small and thin and resemble the look of a wasp. Honeybees have a clear separation between the head and abdomen, but the bumblebee is one round body part. The bumblebee, with more varied species, varies appearance.

The habitat of honeybees and bumblebees offer the greatest distinction between the two. Honeybees are social and live in hives with tens of thousands of their family members. The hives can be domesticated colonies cared for by beekeepers or living in the wild such as a hollow tree. Their colonies can survive the winter intact and the queen will live 3-4 years.

Bumblebees are not as social as honeybees. They nest with a few hundred other bees and are only found in the wild. Beekeepers do not domesticate bumblebee nests. They are often found on the ground in burrows or holes. The queen is the only bee that can survive the winter by hibernating in the ground.

We commonly refer to bees as honey producers. The honeybee in fact is the honey producer. Bumblebees do not produce honey at all. They produce only their own food in their nest.

Bees are the world’s most important pollinator of food crops. One third of the food we consume on a daily basis relies on pollination, mostly by bees. Around 80% of the US crop is said to be dependent on bees. Bees are responsible for $15 billion worth of US crops. The bees also pollinate clover, wheat, hay, and alfalfa which are fed to animals. This means that bees support our livestock’s food and also impact the meat and dairy industry as well. Many valuable food and nonfood products are manufactured from ingredients dependent on bee pollination. Cotton and flax production significantly impact bee pollination. The bee also produces beeswax which is used in household, cleaning, and beauty products.

Bumblebees are better pollinators than honeybees. This is for a few reasons. There are more species of bumblebee. These species have different body shapes and different lengths of tongue. For this reason, they feed on different types of flowers. This means they pollinate a wider variety of flowers. They can even learn how to extract pollen from different flowers and specialize within a certain species.

Bumblebees also have larger bodies than honeybees, so they are able to carry larger loads of pollen from one plant to another. The pollen sticks to their feet and to their round furry bodies, and it is carried from flower to flower.

Bumblebees are fast workers. They are flexible and are adept at cross pollination Finally, bumblebees are better to withstand weather conditions such as cold, wind, and lack of sunlight.

Honeybees do have one advantage. They communicate. The honeybees performs a dance to let their fellow workers know where to find the best pollen supplies. This is an advantage to create more honey but can be a disadvantage for pollination. If the bees are grouped around a smaller set of flowers, they are not spreading the pollen nearly as far as a bumblebee would.

Of course, we know that bees sting for protection. However, the honeybee is only able to sting one time in their life before dying. They swarm and will attack. Bumblebees on the other hand can sting multiple times in their life, yet they only sting when truly provoked. That being said, both types of bees are safe to host in your yard so long as you take sensible precautions.

Bees are endangered, but again, not all bees are equally endangered. Many plant flowers to attract the honeybee and become beekeepers to protect them, but this is actually misguided. Media attention covers them disproportionately over native pollinators. While we focus on promoting the honeybee, we should also do more to encourage the growth in population of all native pollinators.

There are millions of honeybee colonies in North America, 2.8 million of which are in the U.S. Approximating around 30,000 bees per colony (the size of a pollination unit), that’s roughly a billion honeybees in Canada and the U.S. alone—almost triple the number of people. High densities of honeybee colonies increase competition between native pollinators for forage, putting even more pressure on the wild species that are already in decline. Honeybees are extreme generalist foragers and monopolize floral resources, thus leading to exploitative competition —that is, where one species uses up a resource, not leaving enough to go around.

Our position on the humble bee

At Bug Out, we’re pulling to protect the bees. Even if it’s for selfish reasons, it’s important for us to keep on top of their situation. Our job is to eliminate pests, but we love bees and want to help protect them.

Albert Einstein reportedly said that if the bees were to disappear from the Earth, humans would be gone within 4 years. Let’s hope he is wrong, but then again, he was known to be a pretty smart guy.

If pests are giving you difficulties, do not hesitate to reach out for help from the professionals. Likewise, if you see a swarm of bees, call Bug Out immediately to relocate the swarm for you.  Bug Out Pest Control can take care of any uninvited guests in your home! Extermination or relocation.