Beware of the Wheel Bug! 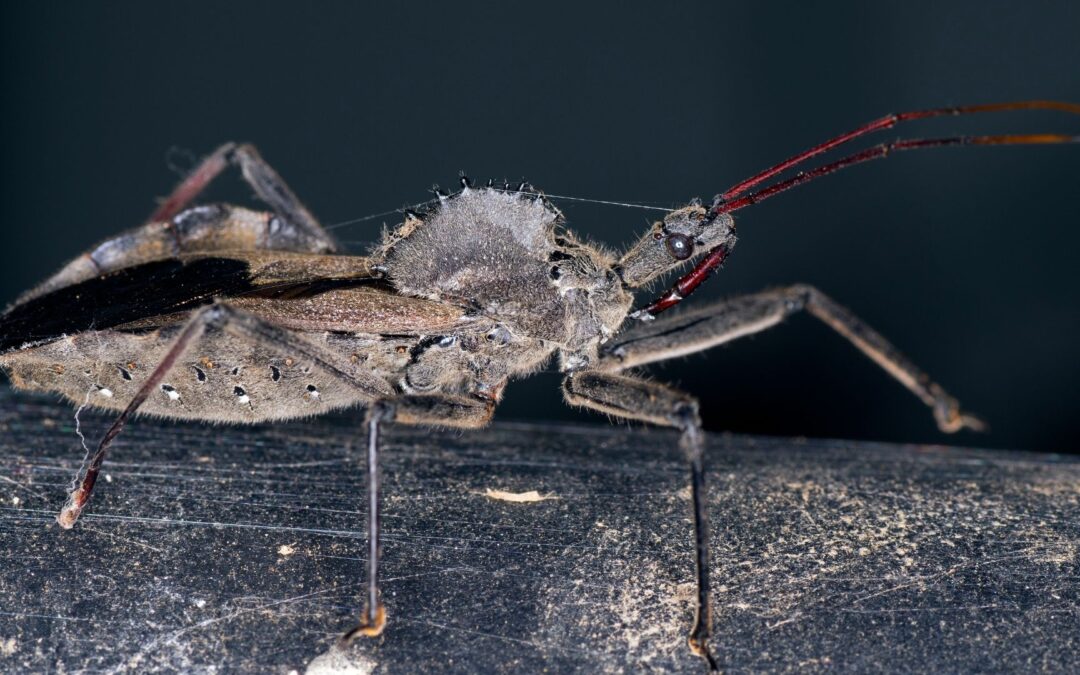 We see many bugs around our properties, homes, and out in nature in Indiana. We do have a lot of invasive insects that are a nuisance. But there is a difference between a nuisance and a danger. Have you ever heard of the wheel bug? It is known also an assassin bug. And the name is not to be taken lightly.

On the other hand, one insect you probably see all the time in your home and one you also hear all about on social media, is the dreaded stink bug. Another insect that we see around the house is one that looks terrifying to a lot of people. People often confuse it as a spider, but it is not. It is a spider cricket.

However, there is one other insect that you might see in your yard this fall that you will want to avoid at all costs. The insect is Arilus cristatus (Linnaeus), a species of ‘true bug’ in the order Heteroptera, in the family Reduviidae, collectively known as the assassin bugs. Arilus cristatus also carries the common name of wheel bug. They are one of approximately 160 different species of assassin bugs. They could give you a bite than take months to heal!

Wheel bugs are round, like a wheel. They are grey and black, and sometimes have bright red coloring in areas. They are known to have very long legs. Their exoskeleton is reminiscent of a Medieval Knight in a large suit of armor. Wheel bugs also have a structure sticking up from above the head that looks like their helmet, but also looks like a cog wheel or gear. No other insect in the United States possesses such a structure and the wheel allows this species to be readily identified. The wheel is where they get their common name.

Life Cycle of the Wheel Bug

Wheel bugs are large and look quite intimidating. They are also very sturdy and robust bugs. Beginning as very tiny newly hatched insects in the spring, wheel bugs grow into adults that measure 1-2 inches in the mid-summer and fall. Wheel Bugs only live for one generation. The nymphs, or younger bugs, look very different from the adults. They often have the orange or red abdomen. They may not yet have the cog wheel on their head. Instead, they may have a tubular shaped head with a long beak that unfolds forward like a knight’s lance.

These large scary looking creatures are ferocious! They have a fang at the front of their head. They repeatedly stab their victims. The wheel bug uses this stabbing to inject their prey with their saliva. This saliva contains a poison that can paralyze their prey within 30 seconds. It then will dissolve their insides and drain all the prey’s body fluid. All that is left behind is the shell of the victim. They are slow moving, and often hide on plants, shrubs, ground cover, or buildings waiting for the pray to come to them. They do have wings, but they have only a clumsy and noisy flight.

Luckily, the wheel bug is not aggressive other than hunting their prey. They try to avoid contact with humans. If you get too close to them, though, they may feel threatened and they will attack you. You are much larger than their prey, so their poison will not paralyze you and they cannot dissolve your insides and drink your fluids. However, the bite is extremely painful. People have described it as ten times worse than a hornet bite. It can take several months to heal and likely leave a scar. The best thing to do is to avoid them altogether.

One victim shared his experience of a wheel bug bite: “I foolishly decided to pick one up by the wheel with my bare fingers, assuming it could not reach me with its relatively short beak – and oh, how wrong I was! The initial bite was not terribly bad, but unusual, feeling like a tiny electrical shock. In less than a minute, however, a sharp, burning sensation began spreading the length of my thumb. The pain reached a crescendo in about 5 minutes and stayed at that level for several hours. The next day, the burning had subsided, but was replaced by a dull, throbbing ache that felt as if I’d smashed my thumb with a hammer.”

Like many insects, light attracts the wheel bug. They may gather around streetlights or front door lights. Mid to late summer is the time of their peak activity. If you see them. Enjoy observing them but keep your distance!

The Good in the Wheel Bug

This scary looking insect does have some good points. If they are living near your property, they will prey on many pest insects such as caterpillars, moths, or soft-bodied insects. These pests can damage your plants. They even eat stink bugs! These predators can be a plus, but the situation can get out of control if there are too many and especially if you have unsuspecting children or pets around.

If you are having difficulty with wheel bugs, or with any other pests, or if the problem is bigger than you anticipated, do not hesitate to reach out for help from the professionals. Bug Out Pest Control can take care of any of these uninvited guests in your home! Call us at 317-777-5005