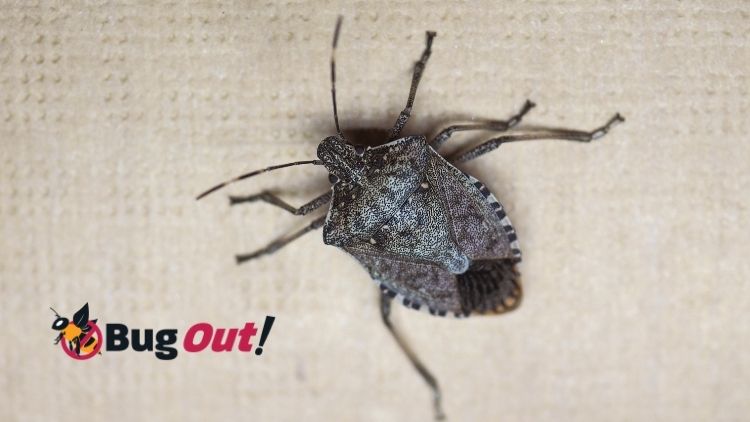 Most people love gardens and the scent of flowers, soil, and new rain. But when a foul odor wafts through the air, it’s distressing. Eliminating the presence of hot, dirty children and pets, you might find that stink bugs are the culprits! There are different insects that produce a foul smell, but there is ONE that is actually called a stink bug.

Outside we wave them away, but when they get into our homes, that’s another whole problem. Of course, here at Bug Out Pest Control, we are ready to help you solve that problem.

What Are Stink Bugs

The brown marmorated stink bug (BMSB) is an invasive species introduced to the US from East Asia including Taiwan, Japan, China, and Korea. Stink Bugs were first found in Allentown, PA in the fall of 1996. But it wasn’t until 2001 when experts identified it. The species spread, and is now most prevalent in the mid-Atlanta region. It is found in 46 states, the District of Columbia, and 4 Canadian provinces. Hundreds of species now occur in North America but only a few invade or overwinter in buildings.

Like all insects stink bugs have 6 legs and 2 antennae. They are triangular shaped and a mottled gray-brown color. They are about ¾” long. Young Stink bugs are yellow and red, and as they grow they molt their skin 5 times and turn brown and gray. Adult stink bugs fly, but the young ones cannot. Adults fly more than a mile at a time but are also excellent hitchhikers being transported on vehicles and animals.

The stink bug gets its name from the odor. It releases the foul scent when disturbed or when someone reaches out to crush it. The odor is meant to protect the insect from predators. Some say that the smell is similar to strong herbs and spices like cilantro and coriander. The smell can linger for hours, so prevent it if at all possible.

Stink bugs reproduce up to 3 generations each year. A female lays 20-30 eggs generally between May and August. The eggs hatch in 4-5 days. This is how they quickly become an infestation!

What are the problems stink bugs cause?

Stink bugs are related to bed bugs. But other than the smell, stink bugs do not cause damage to people or buildings. They cannot sting, they do not bite, and they are not poisonous. They do not spread disease. They are typically more of a nuisance than a threat to humans. However, their fecal spotting stains walls, curtains, and other surfaces.

Stink bugs damage plants and crops. Adult stink bugs feed off of fruits and young ones on leaves. Soybean, corn, wheat, tomato, peppers, beans, squash, pecan, peach, pear, apple, citrus, cherries, berries and grapes are plant they like. The bugs also feed and develop on hundreds of species of woody trees and shrubs. The list of their favorite hosts includes some of the most common plants in the landscape — maple, oak, ash, redbud, serviceberry, pear, crabapple, cherry, honey locust, hawthorn, lilac, etc. An industry group estimates that Mid-Atlantic apple growers alone lost $37 million to stinkbug damage in 2010. These ornamental hosts are capable of supporting large numbers of stink bugs in late-summer that subsequently invade buildings to overwinter.

Stink bugs come in homes in the late summer and early fall when temperatures outdoors start to drop, and days are shorter. They go dormant in cold weather so they seek out shelter to overwinter. They tuck themselves into a dead tree or a rocky outcropping. Of course, this means they also live in sheds, garages, attics, crawlspaces, and other dark, dry, and cool spaces. In nature or in your home, they prefer higher spaces off the ground. If things warm up when they are in a building, they come out of dormancy early and get active again in your home! Come spring, they tend to move back outdoors.

To avoid the production of that awful odor, carefully and gently sweep up stink bugs with a broom. A vacuum cleaner is another way to remove stink bugs from your home. The vacuum will not crush them to release their odor. You will need to immediately dispose of the vacuum bag or empty the canister to prevent the smell. If you find an infestation, a licensed professional will be best to get rid of them.

The first key to prevent stink bugs from making themselves at home in your home, is to completely seal up all windows, doors, and any cracks. Choose silicone or silicone-latex caulk to fill any gaps in typical entry points such as windows, doorways, siding, utility pipes, chimneys, outlets, switches, ceiling fans, skylights, and light fixtures. In addition, repair damaged screens on windows or doors. Stink bugs are attracted to light. With this in mind, using less attractive yellow bulbs or sodium vapor light bulbs outdoors helps as well.

Like many invasive species, the brown marmorated stinkbug has no major enemies here in the US to keep its population in check. In 2005, entomologist Kim Hoelmer and his team at the U.S. Department of Agriculture’s (USDA’s) Agricultural Research Service (ARS) in Newark, Delaware, turned to a strategy known as classical biological control: They traveled to Asia to find natural enemies of the stink bug. They would then release that enemy into the United States. By far the most pervasive parasite they found was the samurai wasp (Trissolcus japonicus), which, despite its fearsome name, is stingerless and smaller than a sesame seed. These wasps inject their own eggs into the eggs of the stink bug so that when the wasps hatch, they eat the stink bug before they emerge.

The team came home to research if importing the wasp was a safe and viable option. Surprisingly, in 2014, samurai wasps were discovered in Florida. That made the decision. The wasps made themselves at home – at the expense of stink bugs.

Don’t have any samurai wasps in your yard? Fighting stink bugs in your house? Call a professional to help! Professionals use traps baited with pheromones or insecticides. If you are having difficulty with stink bugs or with any other pests, or if the problem is bigger than you care to address on your own, do not hesitate to reach out for help from the professionals. Bug Out Pest Control takes care of many uninvited guests in your home! Call us 317-777-5005